TTV is an innovative infrared vision system designed to monitor the surface temperature of the die during the die casting processes of light alloys by high pressure, low pressure or gravity. The thermal map detected by the thermographic cameras installed in the machine using images captured always under the same processing conditions, without interrupting the cycle, provide greater awareness of the process and its optimisation. 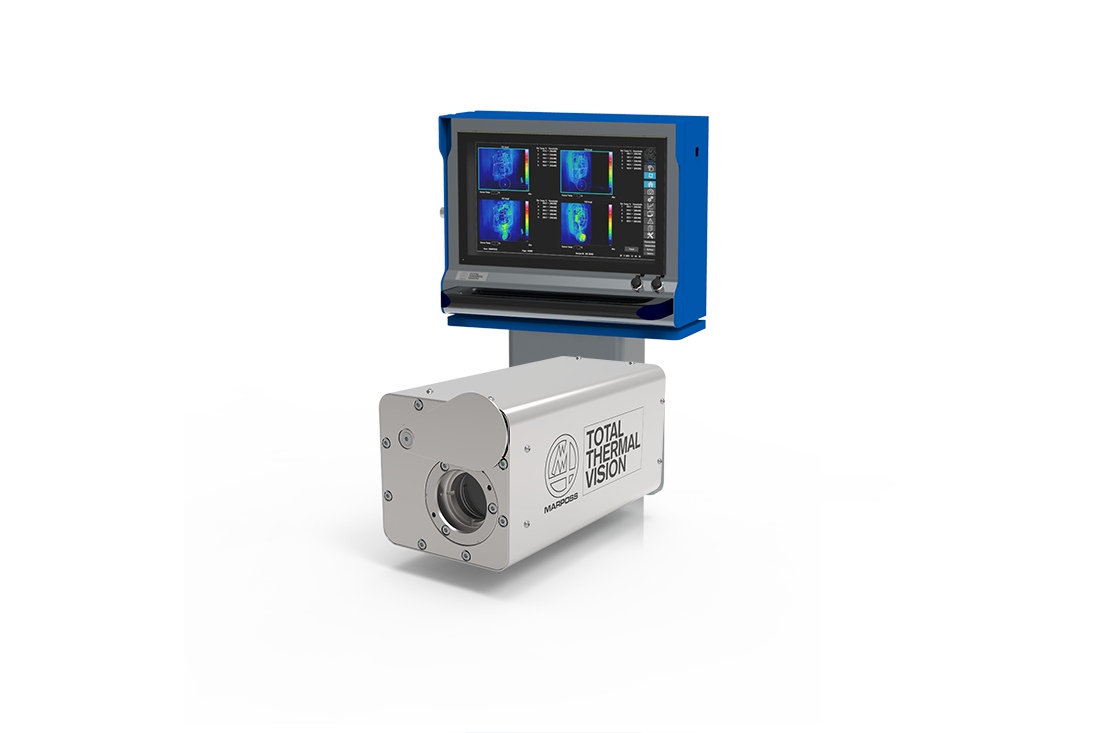 Most defects in the casting process, such as peeling, porosity, shrinkage and deposits are caused, or may be caused, by a non-optimal distribution of the die temperature. TTV monitors the thermal maps to detect any changes and prevent any faults from arising. In this way it is possible yo reduce the number of rejects during the various phases of the process such as, for example, warm up, die set up and part production.

TTV allows the critical points of the cast to be identified by monitoring the surveillance regions, called R.O.I (Region of Interest), and the relative temperature ranges.

The heart of the TTV system consists of the Controller and the Thermal Imaging Camera units, which are specifically designed to operate in the aggressive foundry environments.

The Controller has a built-in PC, with graphic interface to communicate with the die casting machine. The industrial PC may be used to manage and save the various process data via a Full HD touch-screen display.

The Thermal Imaging Camera Units are fitted with a high performance infra-red sensor and the image processing electronics, both protected inside a sturdy stainless steel housing. Fitted with germanium glass, which is transparent to the IR, the housing is protected by an electrically operated shutter and an air jet cleans the window during the die casting process.

The thermal imaging camera units are equipped with an intelligent electronic control unit that includes, accelerometers and temperature and pressure sensors.

The units may be mounted on a graduated, adjustable support so that they can be aligned and regulated according to the requirements of the installation, while ensuring that any such adjustments are repeatable at a later date.

The installation distance depends on the area of the die being monitored. The physical dimensions of the image to be framed define which optics to select (25° or 45°). The table below lists the correlation between the distance of the camera from the target, the optics used and the consequent size, in mm, of a pixel.

The thermal map of the die surface is saved automatically just before and after the lubrication phase, without increasing the cycle time. The images of the temperature distribution provide the thermal balance conditions of the die and the data necessary to improve the cycle and optimise the production process.

The TTV operator interface consists of a touch-screen that displays the thermal maps of the die in real time and provides a prompt alarm if the temperature value measured is above or below the limit set for one or more ROI. The temperature range over time of the die is also given in graphic form.

All the data collected is saved locally or archived in the network server. This can subsequently be used for the post-process analysis and is the fundamental prerequisite of modern and digitalised die casting cells (foundry 4.0).

The technical specifications can be found in the table that can be downloaded from the DOWN-LOAD section;

The controller is available in the following versions: